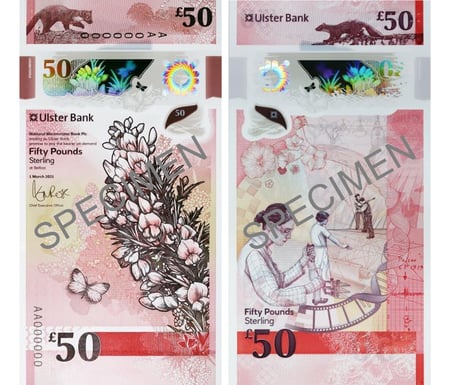 Terry Robb, Head of Personal Banking in Northern Ireland, said: “We have experienced a huge increase in customers moving to digital transactions but banknotes continue to be an important part of the way that many people interact with us. We’re really proud to introduce this latest bold new design.”

“The new polymer notes last two-and-a-half-times longer than traditional cotton notes, making them more sustainable and environmentally friendly. Their advanced security features also make it easier for customers to protect themselves from being a victim of fraud.”

The artwork was designed by O Street and passed to De La Rue who converted the artwork into a functional design, originated the banknote and then printed it onto SAFEGUARD® polymer substrate.

The notes use a portrait orientation with enhanced security features, including two windows, a De La Rue holographic stripe that secures both sides of the banknote with advanced DEPTH™ and PUREIMAGE™ effects, Enhanced GEMINI™ print feature and a tactile emboss feature, enabling physical identification for the visually impaired. The new £50 follows the launch of polymer £5, £10 and £20 notes launched in 2019 and 2020 respectively.

Ruth Euling, Executive Director and Managing Director, Currency said "Congratulations to Ulster Bank on this beautiful banknote – it has been a pleasure to work on this project. We are honoured to continue supporting Ulster Bank as they upgrade to polymer. Thank you to everyone who has been involved."