MASK™
An engaging solution that is hard to replicate.

MASK™ is a simple hide and reveal print feature, appearing as a pattern when viewed normally but revealing hidden numbers or letters when held up to the light.

As well as encouraging engagement with the banknote the effect is lost upon photocopying or scanning and so it increases the security of the banknote. As a cost effective feature it can be used to visually link banknotes in the same series, appearing as coloured or shape variants in a similar position on the note throughout the series.

MASK™ is an easy to describe print feature that can be integrated into paper or polymer banknotes. It uses a of dark or strong colour, combined with white, to appear as a block of pattern when viewed normally. When held up to the light letters or numbers show through to reveal letters or numbers, such as the denominational value or the initials of the central bank.

We are here to answer your questions about this feature. Simply get in touch with Dr Nikki Strickland, Head of Currency Product Marketing 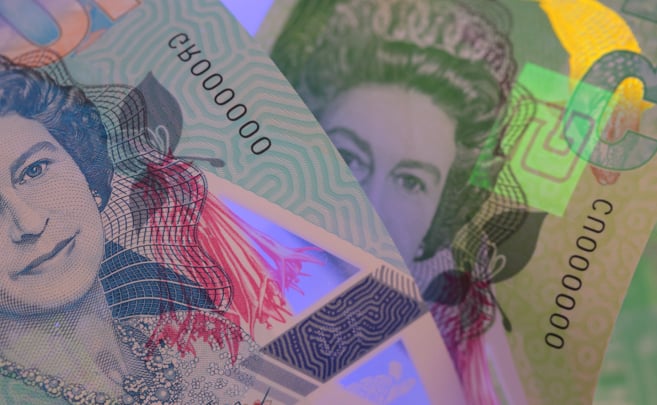 A new series with Mask™ for the Eastern Caribbean Central Bank

The Eastern Caribbean Central Bank issued its new series of banknotes in 2019. The new series were all produced on SAFEGUARD® and security was layered throughout the banknote via a number of print, substrate and holographic security features. MASK™ was included on all five denominations, appearing as a block of pattern separating the two windows and revealing the denominational value of the banknote as the note is held up to the light. In this image you can see the number 10 appearing through the pattern work between the two windows. The consistency of positioning and ease of describing MASK™ provided an easy public education message.