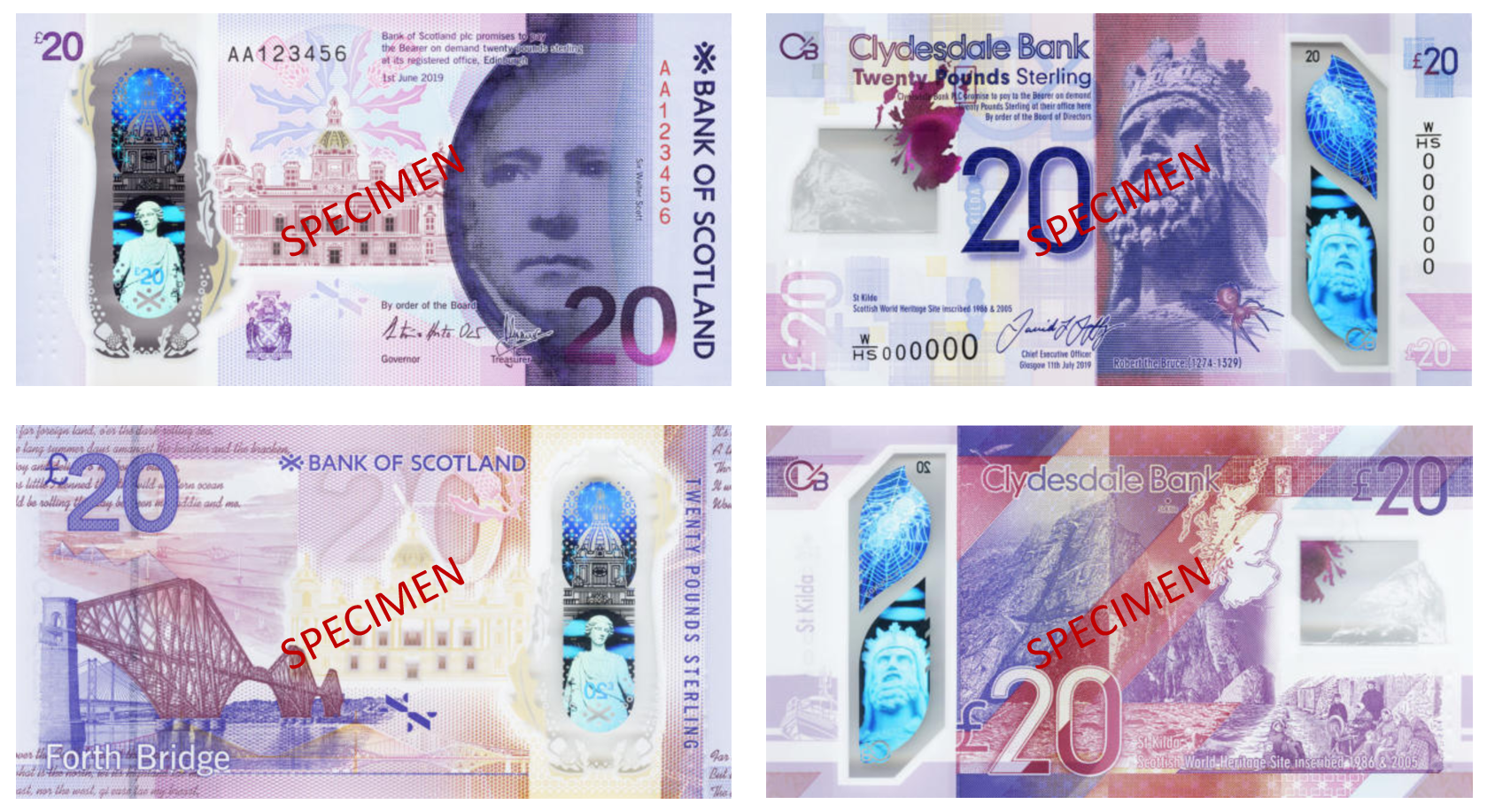 Over the next fortnight three new polymer £20 banknotes will be released into circulation throughout Scotland, starting with the Bank of Scotland and Clydesdale notes today and finishing with the Royal Bank of Scotland’s note on 5th March 2020. This is the first time that the Scottish £20 notes have been printed on a polymer substrate, following the £5 and £10 Scottish banknotes and the Bank of England £20 last week.

Designed and manufactured by De La Rue and printed on De La Rue’s Safeguard® these banknotes share a common colour and set of security features to help with public recognition. All banknotes contain a window that can be looked through, the same tactile embossed feature to help the visually impaired distinguish between different values, microtext, colours that glow under UV light and a colour-shifting metallic ink. In addition Clydesdale and Bank of Scotland denominations contain a holographic foil in their windows featuring imagery relevant to the banknotes. Design themes such as Robert the Bruce and spiders carry across from the paper series in the Clydesdale £20 and themes such as thistles and Sir Walter Scott link to the paper series for the Bank of Scotland £20.

Ruth Euling, Managing Director of De La Rue, Currency says “We are honoured to have worked with Clydesdale Bank, the Bank of Scotland and the Royal Bank of Scotland on their new polymer £20s. Not only does each banknote look fantastic in its own right but it is a testament to our design team that each note complements the other polymer banknotes in the series as well as fitting into a stunning overall series of Scottish banknotes.”

A spokesperson from Clydesdale said “We are delighted with our new £20 note design and encourage members of the public to look at the holographic foil to see a spider crawling as well as view Robert the Bruce in three dimensions.”

Richard Hill from Bank of Scotland said “The new £20 continues the Bridges Series, building on the design and images of the polymer £5 and £10, including the innovative substrate windows as actual windows in The Mound building in the design. The new holographic foil features the statue Victory that sits on top of The Mound building and this hologram is the most impactful to date.”

Malcolm Buchanan, Chair, Scotland Board, Royal Bank of Scotland, said: “We are looking forward to the imminent release of our first £20 polymer note. This is the third in our series of ‘Fabric of Nature’ notes and joins our polymer £5 and £10 notes which celebrate the legacy of Scottish women across art, science and business whilst capturing the beauty and the best the country’s landscapes and natural environment has to offer. Thanks to De La Rue technology, these notes are cleaner, more durable and more secure than their paper predecessors.”