The Art of Designing a Banknote

How De La Rue helped design and produce a commemorative banknote for the Central Bank of Samoa to celebrate the 2019 Pacific Games. 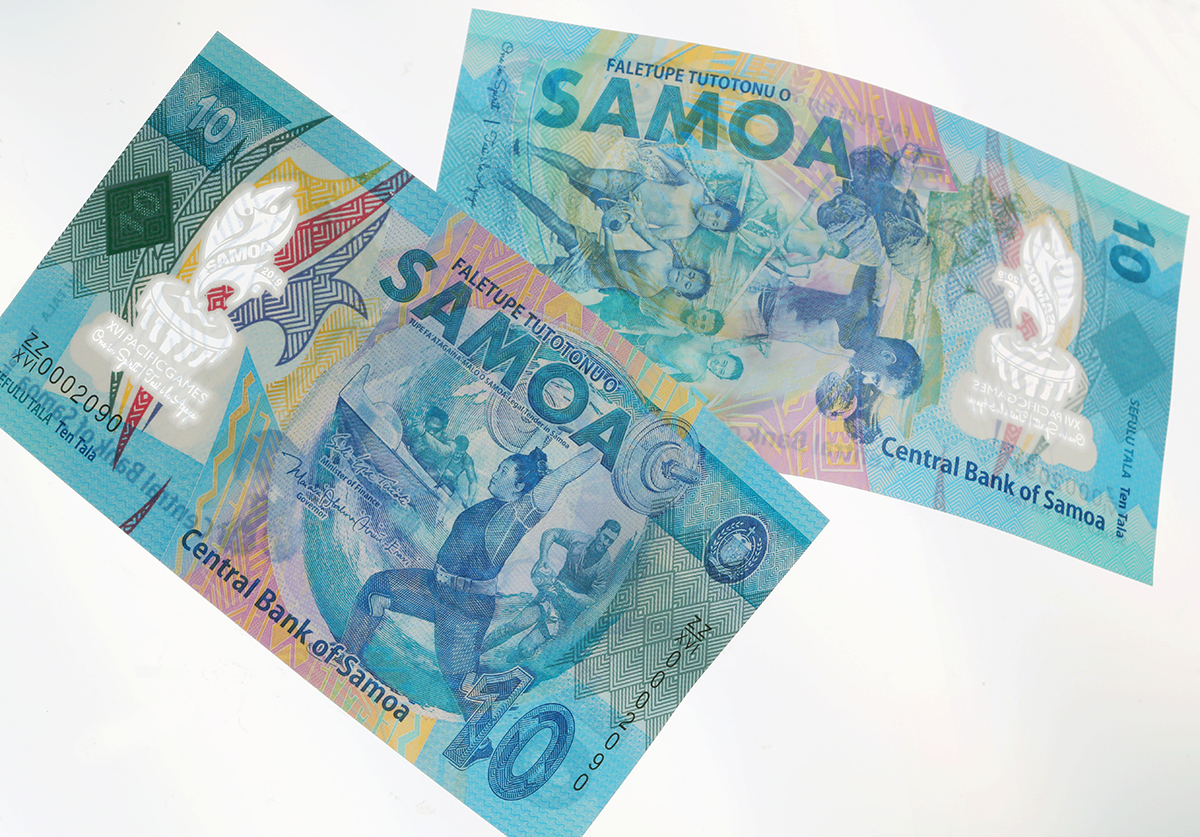 People are often surprised when I tell them that 85% of all payments around the world are still made using cash, with just under 600 billion banknotes estimated to be in global circulation.

At De La Rue, we are involved in the production of around two thirds of these banknotes, working with many different countries around the world. We have a 140-year history of innovation in banknote design, printing and security features.

This year we helped the Central Bank of Samoa design, print and launch the world’s first carbon neutral banknote. The commemorative 10 Tala banknote went into circulation recently to celebrate the nation hosting the Pacific Games.

The Central Bank of Samoa has worked with De La Rue over the past 40 years and together we’ve created a number of its banknotes. Yet this new commemorative note is special - not only as an environmental “world first”, but also as an emblem of a country passionate about sport and a proud host of the Pacific Games.

What to consider when designing a banknote

A banknote is a powerful symbol of the history, culture and sovereignty of a nation, so there’s a great deal of responsibility in getting its design right.

In designing the note, we don’t just mean creating beautiful and intricate images, we also have to take into consideration how the new banknote will be stored, processed, distributed and used locally to determine whether it’s produced on polymer or paper and what security features are included to combat counterfeiters.

When the Central Bank of Samoa said they wanted to create commemorative 10 Tala note to honour Samoa’s hosting of the Pacific Games, we knew we had to create something unique and memorable.

This was the start of a close design collaboration, bringing together best practice and experience from De La Rue’s design team with local knowledge and creative ideas and input from the bank.

Our design journey began with a bespoke creative workshop which we hosted in Samoa. This gave our designers the opportunity to talk through all aspects of the new note’s lifecycle, from its circulatory environment and usage, to how it would complement the existing notes (including the 10 Tala) already in circulation.

While the bank didn’t have its own design team, we were lucky to be working with some really creative and enthusiastic people there, including Lole Tualaulelei in the currency team, who was our main contact and design collaborator.

Our time in Samoa proved invaluable, not only to gain a deeper level of understanding and connection with the Governor and the bank, but also for the opportunity to spend time on the island meeting Samoans from all walks of life. We were also able to get a true sense of the vibrancy, abundance and rich culture and heritage of Samoa and its people, which helped to inspire our designers back in the UK.

From our initial meetings, we knew as a commemoration of the Pacific Games, this note was going to focus on sport. Our joint challenge was how to translate this into a design that reflected Samoa’s sporting excellence and legacy, especially in its most popular sports of rugby, rowing and women’s weightlifting.

Our senior designer Andy Macey started to sketch freehand some ideas based on those that Lole had created around Samoa’s sporting traditions and cultural heritage. We find that doing freehand drawings initially rather than using the computer gives us more freedom and expression.

After a number of iterations, the design concept was agreed and delivered, with Andy spending time in Samoa to help with the final sign-off process.

The creative concept was based around the connection between children playing sports for fun around the island on one side of the note and adults competing at the highest level in some of Samoa’s most popular sports on the other. The bonds between young and old, and the sporting passion felt so deeply across the whole of the Pacific reflected in the images chosen.

Every element of the design has a connection to Samoa, its culture and natural environment; from the tattoo patterns (reflecting the ‘rite of passage’ tattoo ritual) created by our pattern specialist at De La Rue, to a circular swish representing a circle of fire seen at traditional Samoan dances, which forms a design’s focal point.

The boys on the back of note are using a coconut as a rugby ball, a familiar sight on Samoan beaches, and a hollowed-out trunk as a canoe for fishing. The adults on the front of the note are competing in weightlifting, rugby and rowing to demonstrate the importance of these sports in Samoan culture.

By using these instantly recognisable and important cultural and traditional references, we were able to create an authentic, powerful and emotive design that the bank felt would resonate with Samoans and make them feel proud.

Building security into the design

When designing a bank note it is important that all the safety features are incorporated into the overall design concept from the outset. The note is printed on De La Rue’s Safeguard® polymer substrate, as this is a better defence against counterfeiters, and this dictated the security innovation we integrated.

We were able to use the see-through window, unique to polymer notes, to depict the Pacific Games logo. We also included the De La Rue MASK™ feature, a simple ‘hide and reveal’ effect that cannot be easily replicated by scanning or printing and is highly durable. As part of the design to aid the visually impaired, we also included a tactile embossed feature to help easily identify its denomination.

Creating and producing a new banknote is a highly skilled and specialist challenge, and one that works best with insight and engagement that comes from a close partnership throughout the design journey. This approach certainly paid off helping the Central Bank of Samoa to create a popular and treasured note, with positive feedback from Samoa’s Minister of Finance, the Chairman of the Pacific Games as well as from many Samoans. 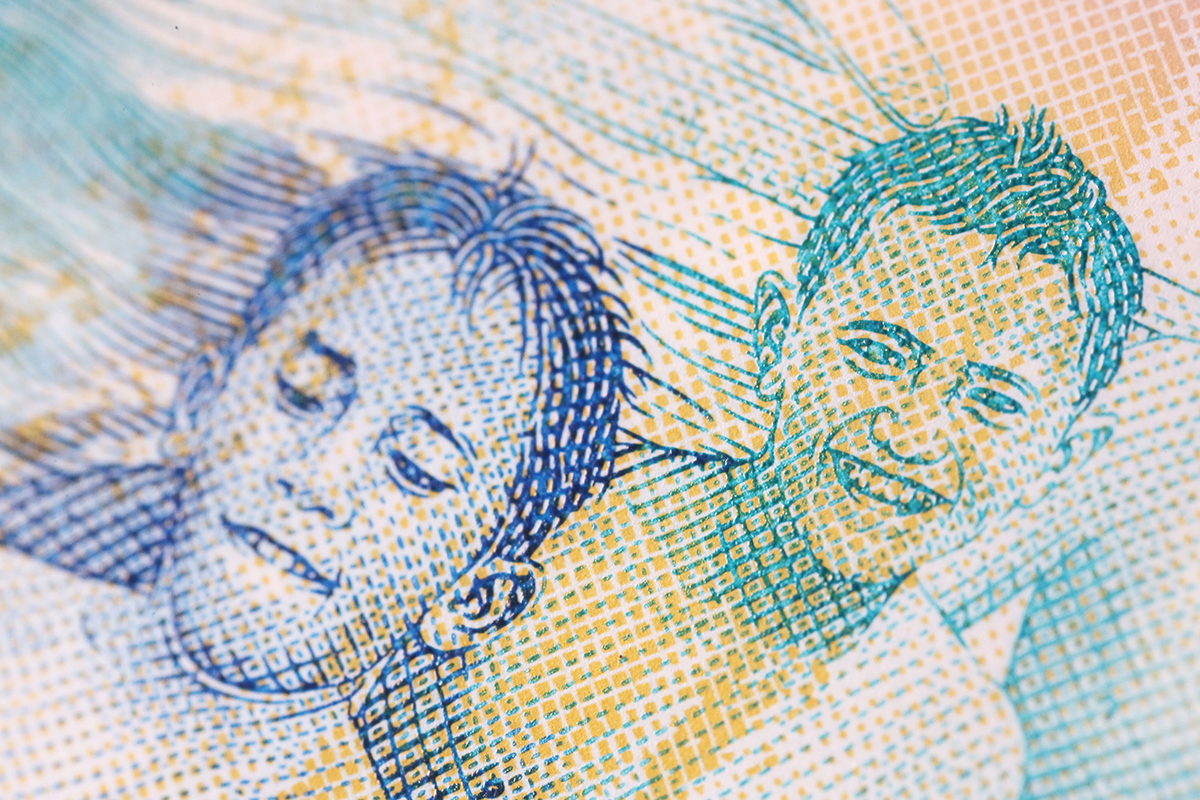