The Royal Bank of Scotland’s £20 polymer banknote is released into circulation today.

Designed and manufactured by De La Rue and printed on De La Rue’s Safeguard® the £20 is the third in a series of ‘Fabric of Nature’ themed notes, following the £5 in 2016 and £10 in 2017, and the biggest volume circulating note.

In keeping with the Fabric of Nature theme, the new £20 features illustrations of red squirrels on its reverse and also features the blaeberry fruit. The red squirrels on a tree illustration for the £20 follow mackerel in the sea on the £5, and otters on the shore for the £10. The note design also includes extracts from 16th century Scottish poet Mark Alexander Boyd’s work, Cupid and Venus and carries the same exclusive weave pattern developed by textile designers Alistair McDade and Elspeth Anderson for the £5 and £10 polymer notes. 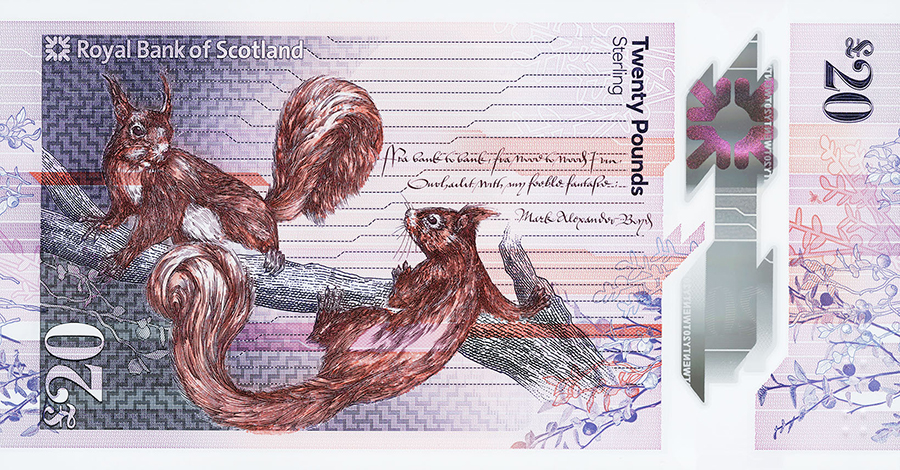 The £20 features an image of Kate Cranston, the turn of the century entrepreneur who commissioned Charles Rennie Mackintosh to design her famous Glasgow tearoom. This banknote continues the Royal Bank of Scotland’s celebration of Scottish women who made a significant impact and follows on from Nan Shepherd on the £5 and Mary Somerville on the £10. To ensure the notes remain difficult to counterfeit yet easy to recognise by the public, they feature a window that can be looked through, a tactile embossed feature to help the visually impaired distinguish between different values, microtext, colours that glow under UV light and an optically variable ink.

Ruth Euling, Managing Director of De La Rue, Currency says “We are proud to have partnered with the Royal Bank of Scotland on their Fabric of Nature series of polymer banknotes including the latest £20 note offering a number of security features easily identifiable by the general public.”

Malcolm Buchanan, Chair, Scotland Board, Royal Bank of Scotland, said: “We are excited to release our first £20 polymer note today. This is the third in our series of ‘Fabric of Nature’ notes and joins our polymer £5 and £10 notes which celebrate the legacy of Scottish women across art, science and business whilst capturing the beauty and the best the country’s landscapes and natural environment has to offer. Thanks to De La Rue technology, these notes are cleaner, more durable and more secure than their paper predecessors.”