The new £50 which enters circulation today features an illustration of women’s education pioneer Flora Stevenson and the Scottish Osprey. It is the fourth note in the Fabric of Nature series, which began in 2016. 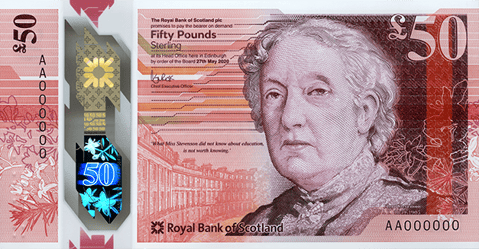 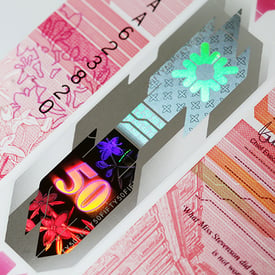 Malcolm Buchanan, chair, Scotland Board, Royal Bank of Scotland:
Royal Bank of Scotland has been issuing banknotes since 1727 and they play an important part in our 300-year history, but we feel that the value is more than just the portrait and pictures printed on the notes. It is a commemoration that lives in people’s pockets and offer the chance to celebrate and remember those who have helped shape our society and the communities that the Bank serves.

The new £50 banknote was designed and printed by De La Rue on SAFEGUARD® substrate and features with a clear window with a holographic foil stripe featuring the RBS logo above a number ‘50’ with Ladies Bedstraw flowers in the background. The £50 also includes Enhanced GEMINI™ and, as with the £10 and £20, the £50 will have a tactile emboss feature for the visually impaired.

Ruth Euling, Executive Director and Managing Director, Currency: “Congratulations to the Royal Bank on the launch of this remarkable banknote. We are privileged to have supported the design of such a beautiful series of banknotes as they transitioned their denominations to polymer.”