HSBC Hong Kong have revealed the designs of their new banknote family, with the complete new series designed in collaboration with De La Rue.

The Hong Kong Monetary Authority (HKMA) set a theme for the Note Issuing Banks – HSBC, Bank of China and Standard Chartered Bank – to base their new series of notes on the ‘Facets of life in Hong Kong’. De La Rue and HSBC wanted to create something wholly different with these designs and used a combination of design techniques. The portraits and vignettes on both the front and back of the notes utilise specially commissioned watercolours, which were then painstakingly rendered into highly secure note design by our skilled design team. This technique affords the notes a wonderfully distinctive style. The front features the famous HSBC bronze lion, ‘Stitt’ framed by the HSBC head office in Hong Kong. Each note in the series depicts ‘Stitt’ from a different perspective.

The reverse of each note showcases different aspects of Hong Kong, from the prosperity and development of the financial metropolis to its unique natural geology and landscape. Moving through the note series, you then see exquisite designs resembling rich culture and heritage depicted in Cantonese Opera, abundant flora and fauna, and finally leisure and entertainment highlighting a family tea gathering.

De La Rue’s Creative Director Julian Payne commented ‘Our design team are immensely proud of their work on this new series for HSBC. De La Rue and HSBC collaborated on the design of their 2010 series, so being able to partner with HSBC again shows the strength of our ongoing relationship. We were eager to create a completely new style for the upcoming series, using innovative design techniques and tapping into the expertise of many different designers from within De La Rue. The design was a tremendous team effort from both De La Rue and HSBC designers, and is a true resemblance of the passion and dedication from the team for this project.’ 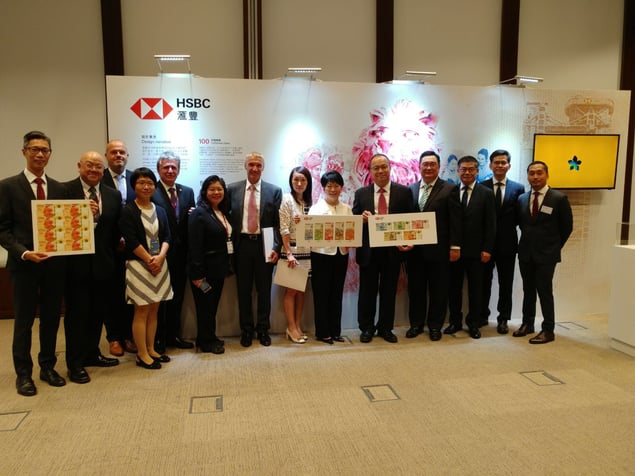