Ulster Bank completes the polymer transition of the £20 in Northern Ireland with the issue of their new note on the 14th October.

Ulster Bank's new £20 enters circulation today, completing the transition of the £20 in Northern Ireland following Danske Bank and Bank of Ireland’s polymer £20 issues earlier in the year. This follows the launch of polymer £5 and £10 notes launched in 2019.

Like the Bank of England and the three Scottish Commercial Banks, the Northern Irish Banks transitioned to polymer to ensure that their banknotes are cleaner, greener, and more durable.

The £20 note reflects local music and culture with street entertainers and their audience as well as tiles, brickwork and patters inspired by Northern Ireland's ubiquitous red-brick tenement buildings. Other design elements were drawn from the decoration on public buildings, corporate architecture and homes in Northern Ireland. 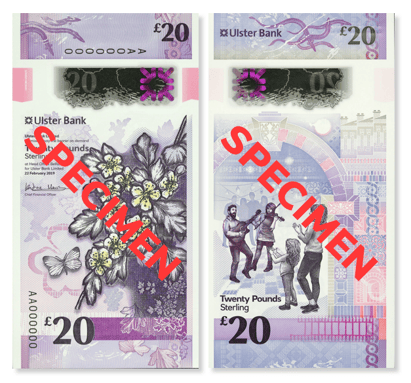 The note also incorporates Derry/Londonderry’s Halloween celebrations into the security features of the note; under a UV light, skeletons and Leisler’s bat – the largest type of bat in Ireland – can be seen.

Terry Robb, Head of Personal Banking in Northern Ireland, added: “We’ve received really positive feedback on our unique designs. Bank notes continue to be an important part of the way that people interact with us, and we’re proud to introduce these bold new designs which celebrate our cities and commitment to enjoying ourselves.”

The notes include enhanced security features, including Spark Orbital, GEMINI™ and a tactile emboss feature, enabling physical identification for the visually impaired.

Ruth Euling, Managing Director, De La Rue Currency: “congratulations to Ulster Bank on this beautiful banknote – it has been a pleasure to work with Ulster Bank on this. We are honoured to continue supporting the Scottish and Northern Irish Banks as they upgrade their banknotes to polymer.”