The New Sir Winston Churchill Fiver, printed by De La Rue, is issued into circulation today by the Bank of England

De La Rue has been working with the Bank of England to deliver the New Fiver, which has a large clear window showing images of the Queen and a bright holographic image of the Elizabeth Tower, which can be seen from both sides of the note. The Tower is gold on the front but silver on the back. Sir Winston Churchill and the Houses of Parliament are depicted on the back.

Commenting on the new notes, Chief Cashier of the Bank of England Victoria Cleland said: “It has been an exciting time, bringing the New Fiver to life and working very closely with De La Rue and other suppliers to pull all the elements together in this complex project. We are delighted with the result and thank De La Rue staff for their support and dedication: they have played a key part in this development”.

Martin Sutherland, De La Rue CEO said “This turnkey project has involved the detailed integration of many moving parts and we have worked tirelessly with the Bank to bring it to a successful conclusion. Sir Winston Churchill would have been proud. Now that the New Fiver is issued, we look forward to continuing our long and successful relationship with the Bank as we move on to the new polymer £10 which will be issued next year”. 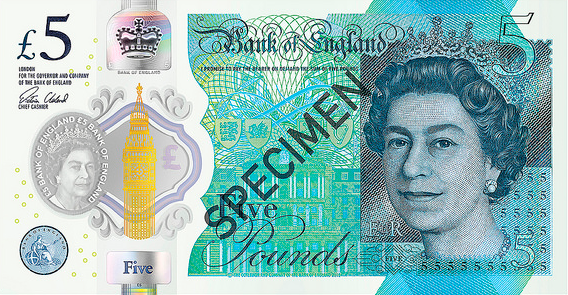 About De La Rue:
De La Rue’s purpose is to enable every citizen to participate securely in the global economy. As a trusted partner of governments, central banks and commercial organisations, De La Rue provides products and services that underpin the integrity of trade, personal identity and the movement of goods.