The designs of a limited edition commemorative 10 Tala ($10) banknote have been unveiled today by the Governor of the Central Bank of Samoa to celebrate the XVI Pacific Games. This is the third time Samoa have hosted the Games, a multi-sport event exclusively for countries in and around the South Pacific, which is taking place in from 7th – 20th July 2019. This banknote is the first known carbon neutral polymer banknote, leading the industry and helping to combat global climate change.

The $10 note has been designed by De La Rue and printed on De La Rue’s Safeguard® polymer substrate; this will be the Central Bank of Samoa’s second polymer banknote. The theme of the banknote is a celebration of Samoa’s youth and their sporting legacy, with their stories being told through images on each side of the banknote.

Integrated into the banknote design are a number of security features that ensure the note is easy to recognise yet cannot easily be counterfeited. The see through window, unique to polymer banknotes, depicts the Pacific Games logo, and the note also includes De La Rue’s MASK™ feature, a simple ‘hide and reveal’ effect that cannot be easily replicated by scanning or printing and is highly durable. To aid the visually impaired the commemorative note includes a tactile embossed feature, which can be used to identify the denomination of the banknote.

The Central Bank of Samoa and De La Rue are both extremely proud to have been able to work with Carbon Footprint Ltd to make this banknote Carbon Neutral by offsetting the emissions from production used through funding an equivalent carbon dioxide saving elsewhere. This is a first for both the Central Bank of Samoa and De La Rue, and also the first known polymer banknote to be carbon neutral. For this banknote, the carbon impact of both the materials and manufacturing process have been calculated and offset by supporting a high-quality power generation project in Indonesia. Further details of the project supported can be found here.

“We are extremely proud of the new commemorative banknote created to commemorate the XVI Pacific Games 2019 being hosted in Samoa, and are thankful to De La Rue for their close collaboration throughout this project and supporting us in developing our first carbon neutral banknote.”

The notes will be launched into circulation in June 2019. 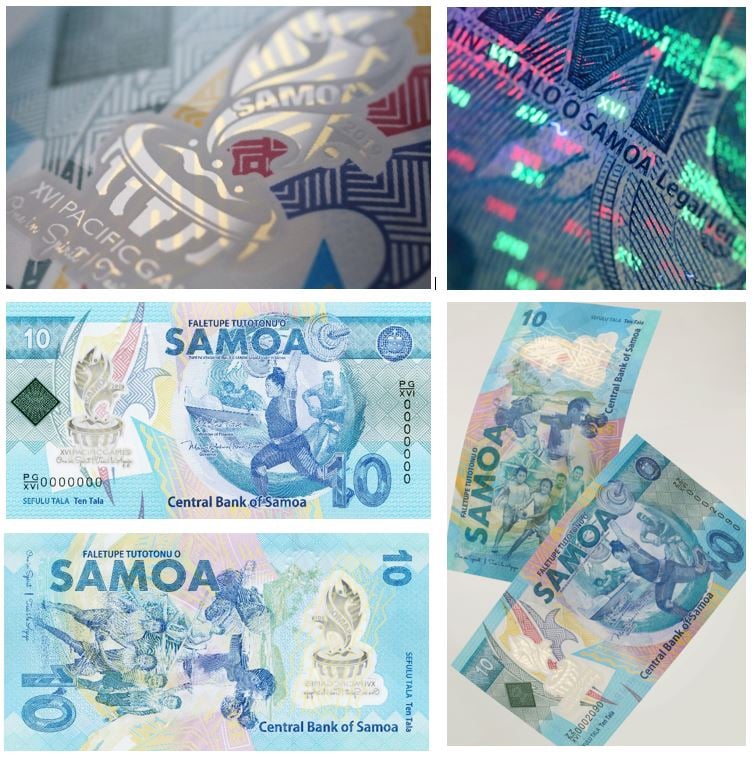 MASK™ is a trademark of De La Rue International