4 October 2016: The Bank of Scotland has today issued its fully circulating £5 polymer banknote on De La Rue’s Safeguard®. This is the 20th Safeguard® denomination issued into circulation since the substrate was launched less than 4 years ago.

In October 2015, the Bank of Scotland issued a one-off limited edition of this £5 banknote which was sold at auction in aid of BBC Children in Need. Now the fully circulation notes are issued into circulation for the first time. The banknote features a portrait of Sir Walter Scott and the design makes novel use of secure windows in the image of the Bank’s headquarters The Mound in Edinburgh.

Speaking on the occasion of the launch, Graeme Donald, Head of Industry Development, Payment and Technical Services of the Bank of Scotland commented “We are delighted to be issuing the fully circulating note following the success of the fund raising note last year. Our thanks to De La Rue for their help with this project.” 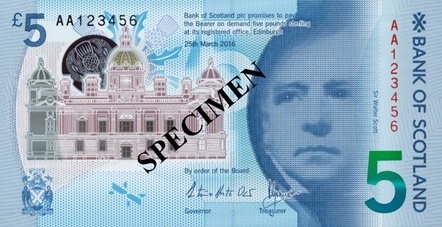 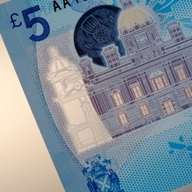