NOTES SELL OUT IN 15 MINUTES, AUCTION SEES OVER 2500 BIDS 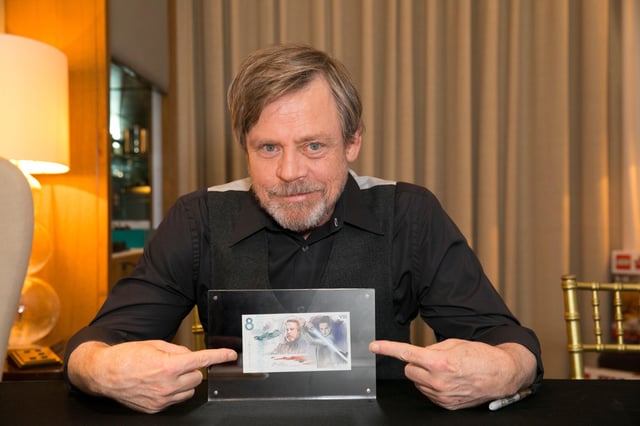 UK charity Together for Short Lives today received one of the largest single donations in the history of the organisation after the auction for the official Star Wars: The Last Jedi commemorative note closed at a staggering £186,754. The money raised by the note, created in partnership between Disney, De La Rue and the GREAT Britain Campaign and auctioned exclusively on eBay, will help more children with life-threatening and life-limiting conditions receive the very best of care.

Polly Shute, Executive Director of Fundraising at Together for Short Lives, comments:

“The generosity of Star Wars fans around the world has been overwhelming and this donation, one of the largest single donations in our history, will make a huge difference to the care we can provide to the 49,000 children and young people in Britain living with life-threatening or life-limiting conditions. We’re hugely grateful to Disney, De La Rue, The GREAT Britain Campaign and eBay for their support in this unique project and it’s a fantastic example of the special relationship between the franchise and the UK. The money raised could provide over 7,400 hours of specialist hospice care; giving families precious moments together and allowing parents the rare opportunity to just be mum and dad.”

The commemorative note was created using the technological and design expertise of British company De La Rue, a company that provides currency to over two thirds of the world’s countries, including the United Kingdom. It forms part of a special initiative between Disney and the GREAT Britain Campaign to celebrate the 40 years of British creativity behind the Star Wars films.

100% of the money raised from the commemorative note will be donated to Together for Short Lives, on behalf of Star Wars: Force for Change. Together for Short Lives, a UK-based charity, supports children’s hospices and all children with life-threatening and life-limiting conditions and their families. Star Wars: Force for Change, a charitable initiative from Lucasfilm and Disney, harnesses the strength of Star Wars to empower and improve the lives of children around the world. This Christmas, The Walt Disney Company UK has combined forces to launch a broad campaign across its range of businesses and its partners’ platforms to raise money, awareness and to create magical memories for the children under hospice care.

eBay was the exclusive home for the auction which saw the limited edition notes available at a fixed price of £100 sell out within just fifteen minutes. The auction lots, which closed at 8pm on Monday 18th December, attracted over 2500 bids with winners from Australia, China, Germany, Italy, South Korea, Sweden, the USA and the UK. 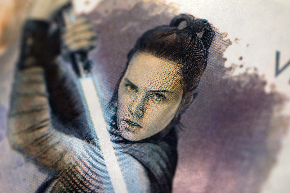 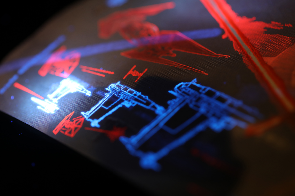 The notes were crafted with 100% cotton cylinder mould paper, securitised and printed in De La Rue’s high security proofing department based in Hampshire. They incorporate an original light side/dark side artwork composition and several special features including serial numbers; pattern work of the First Order and Resistance emblems; hidden scenes (discoverable under 365nm UV light); hidden messages in microtext (discoverable with an eye glass); a message in Aurebesh, one of the languages of the galaxy; and the signature of Director/Writer Rian Johnson. The 50 unique, premium notes include an intaglio (a raised, hand-engraving of Rey) and each have a unique, sequenced serial number.

“It’s incredibly exciting to be part of this one of a kind initiative to mark the release of The Last Jedi and for such a fantastic cause.” says the film’s director Rian Johnson, whose signature appears on the official note. “It was a joy filming in the UK and working with a British crew and I’m delighted the GREAT Britain Campaign and De La Rue are celebrating this with the commemorative note.” 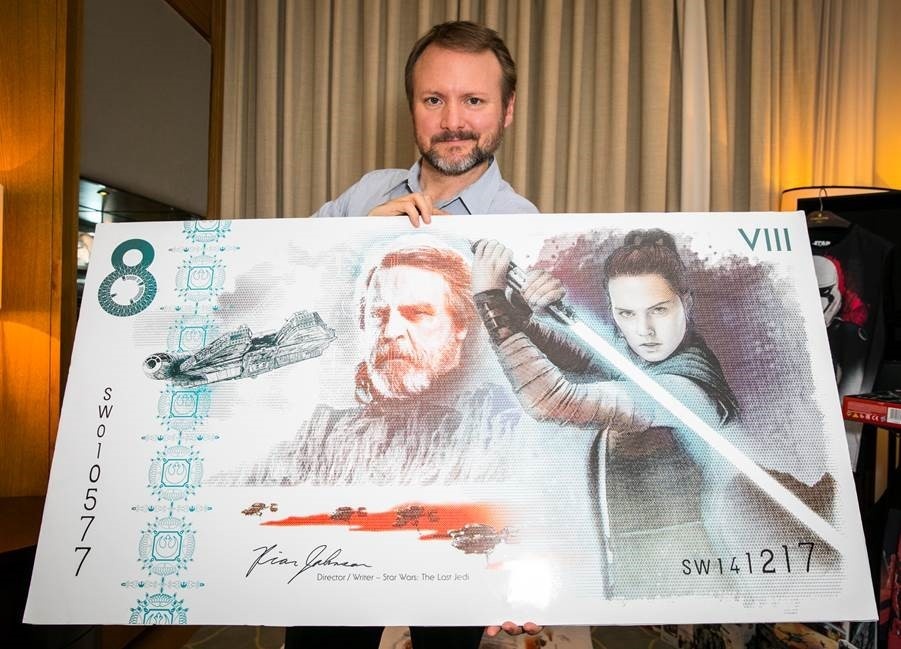 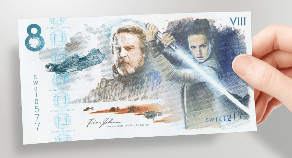 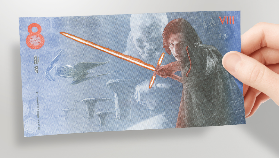 ABOUT STAR WARS: THE LAST JEDI

ABOUT THE GREAT BRITAIN CAMPAIGN

The GREAT Britain Campaign is the UK Government’s most ambitious international marketing campaign ever and showcases the very best of what Britain has to offer in order to encourage the world to visit, study and do business with the UK. It is active in over 144 countries and has so far generated over £3bn in economic returns for Britain. For questions about the UK’s creative industries including film please contact:

De La Rue is the world’s largest commercial producer of currency and passports, supplying two thirds of the world’s countries. We are a great British business, with 200 years of experience in international trade and export 80% of our products globally. De La Rue also creates security features that ensure banknotes are protected against counterfeiting and provides governments and commercial organisations with the tools they need to tackle illicit trade. In the last three years alone, De La Rue generating over 7 billion unique products and solutions annually – in the form of banknotes, passports and secure product identifiers. De La Rue is listed on the London Stock Exchange (LON-DLAR).

ABOUT STAR WARS: FORCE FOR CHANGE

Star Wars: Force for Change, a charitable initiative from Lucasfilm and Disney, harnesses the strength of Star Wars to empower and improve the lives of children around the world. Since 2014, it was inspired by Star Wars fans, and the countless hours they have dedicated to philanthropy over the past four decades. To date, over $16 million has been raised for charitable causes around the world on behalf of Star Wars: Force for Change. With a bright future ahead, and new Star Wars stories to be told, Force for Change aims to continue collaborating with causes and encouraging others to be forces for change in their own community. To learn more, please visit ForceForChange.com.

eBay Inc. (NASDAQ: EBAY) is a global commerce leader including the Marketplace, StubHub and Classifieds platforms. Collectively, we connect millions of buyers and sellers around the world, empowering people and creating opportunity through Connected Commerce. Founded in 1995 in San Jose, Calif., eBay is one of the world's largest and most vibrant marketplaces for discovering great value and unique selection. In 2016, eBay enabled $83 billion of gross merchandise volume

ABOUT TOGETHER FOR SHORT LIVES

Together for Short Lives is a UK wide charity that, together with its members, speaks out for all children and young people who are expected to have short lives. The charity is there to help children and their families to access specialist children’s palliative care services when and where they need it. They provide information so families know where to go for support and have the help they need to make the right choices about their child’s care. Together for Short Lives supports all the professionals, children’s palliative care services and children’s hospices that deliver lifeline care to children and families across the UK. Together with everyone who provides care and support to these children and families, the charity is there to help them have as fulfilling lives as possible and the very best care at the end of life.