The Bank of Scotland’s new £10 notes are available today

De La Rue worked closely with the Bank of Scotland on the design of the new £10 note, which will raise money for Mental Health UK when it is released.

The Bank of Scotland will be auctioning some of their banknotes in October and November to support the charity. Amongst the banknotes being auctioned will be 18 unique, hand-printed notes featuring ‘totems’ - original station signs along the West Highland line on which the Glenfinnan Viaduct sits – one of the iconic images on the new notes. The serial numbers have been matched to the steam locomotive type that used to operate on the line.

As well as the Glenfinnan Viaduct, new £10 note continues to feature a portrait of Sir Walter Scott, and also includes the Bank’s Head Office, The Mound. It also incorporates the enhanced security features introduced on the £5 polymer note which launched last year. This includes the anti-counterfeit ‘window-effect’ built into the windows of the image of The Mound, and the ‘rolling-bar’ metallic ink which changes colour as the note is moved.

The note also includes a new Tactile Emboss feature designed to help blind or partially sighted users identify the note. This is in addition to the features already incorporated into the existing banknotes; tiered sizing, bold numerals, raised print and differing colour palettes.

'We are proud to have partnered with the Bank of Scotland on the design and production of their new £10 polymer banknote and delighted that through our strong relationship we could support them with their charity auction for World Mental Health Day.' 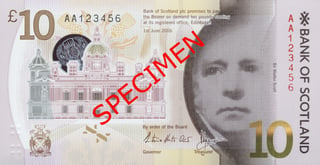