Monday 2 November 2015: De La Rue congratulates the Maldives Monetary Authority (MMA) on the occasion of the launch of the exciting new Maldives family of Safeguard® banknotes.

As previously announced, the new family of 6 banknotes – Rufiyaa 10, 20, 50, 100, 500 and 1000 - launched on 1 November has been designed by local designer Abdullah Nashaath and was printed on Safeguard by De La Rue, in close association with the MMA.

The stunning family of banknotes marks a radical departure from the previous issues and represents an exciting development in the design of Safeguard banknotes. There is an attractive all over iridescent print on the front of all values as well as the hide and reveal MASK™ feature which reveals the letters MMA when it is held up to the light.

Commenting on the launch, Governor Dr Azeema Adam said "These beautiful and secure new banknotes reflect the culture and heritage of the Maldives people and are a fitting reflection of our diverse nation. We are very grateful to De La Rue for assisting us in bringing these new notes to life."

De La Rue's Global Account Management Director Ruth Euling stated "We are absolutely delighted with these new banknotes and continue to be honoured by our on-going partnership with the MMA". 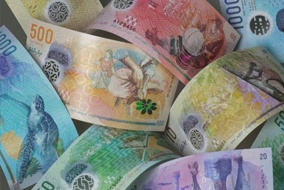 As the world's largest commercial banknote printer, De La Rue provides customers with a fully integrated range of sophisticated products and services which are available either individually or as a whole. This includes a leading design capability, production of innovative security components, manufacture of security paper and polymer substrates and sophisticated printing of banknotes, all contributing to trust in the integrity of currencies.

De La Rue is the world's largest commercial passport manufacturer in an environment of increasing global concern over security at national boundaries and border control. De La Rue also produces a wide range of other security products, including tax stamps for governments who are seeking to combat illicit trade and collect excise duties. Other products include authentication labels, assuring purchasers of product validity, and government identity documents. In addition the Group manufactures high speed cash sorting and banknote inspection equipment.

About Maldives Monetary Authority:
The Maldives Monetary Authority (MMA) was established on 1st July 1981, and is endowed with the regular powers and obligations of a central bank under the mandate provided by the MMA Act (1981). To this effect, the MMA issues currency, regulates the availability of the Maldivian rufiyaa and promotes its stability, licenses, supervises and regulates institutions in the financial sector, formulates and implements monetary policy, and advises the Government on issues relating to the economy and financial system in order to foster an environment conducive to the orderly and balanced economic development of the Maldives.