Thursday 27 October - today the Royal Bank of Scotland (RBS) has issued its new £5 which has been produced by De La Rue on its Safeguard polymer substrate. As the 21st Safeguard note to be issued, this marks the coming of age of this novel substrate.

Following a widespread public consultation exercise run by the Royal Bank, the note theme of ‘natural colour and light’ was chosen to underpin the design elements of the new note. The Scottish novelist and poet Nan Shepherd features on the front of the note with her beloved Cairngorm mountains in the background. Mackerel fish appear on the back in recognition of their importance as the single most valuable species for the Scottish fishing industry.

De La Rue worked in close collaboration with the RBS design teams and maximum use is made of the clear window that is the hallmark of Safeguard banknotes. The RBS logo is printed using SPARK® Orbital™ optically variable ink in the window, allowing it to be seen from both sides of the note.

Commenting on the launch, Malcolm Buchanan, Chairman of RBS Scotland, said: “This is an exciting time and we are delighted with our new ‘people’s’ banknotes. The public input into the design themes was vital and we are grateful to De La Rue for helping us to bring the ideas to reality”.

De La Rue’s Ruth Euling, Global Account Director, commented “We are delighted that Safeguard is coming of age and are honoured to have worked with the Royal Bank on these beautiful new notes which have already been nominated for a design award.” 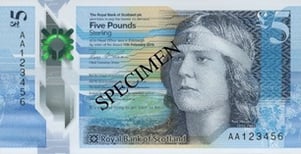 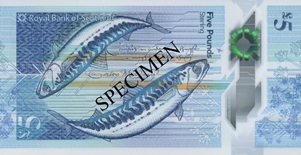 SPARK® is a registered trademark of SICPA Holding SA.


De La Rue’s purpose is to enable every citizen to participate securely in the global economy. As a trusted partner of governments, central banks and commercial organisations, De La Rue provides products and services that underpin the integrity of trade, personal identity and the movement of goods.