De La Rue Malta goes from strength to strength as its new product authentication facility was today opened by the Prime Minister of Malta.

De La Rue’s Malta factory which employs 567 staff, is a centre of excellence across all three of its portfolio areas – Currency, Identity and Brand Protection. The new facility marks the completion of the 27million Euro investment that started two years ago.

“The fact that a global leading brand in its field has time and time again chosen Malta as a principal base to support its global operations is a certificate of the excellence of our workforce and the honesty of our partnership with industry.”

“I am very grateful for the long-term partnerships here in Malta which have supported us over the last 40 years. I would also like to extend my thanks to all of the team who are continually recognised for their excellence across the whole organisation. Malta is a central part of De La Rue’s international strategy and we committed to investing in the future.”

“Today gives me real pride because it is another important milestone in our journey in Malta that stretches back more than 40 years and the teams working here are the very best in the world at what they do.

“Whilst I am deeply proud of them, our heritage and our history, it is the next 40 years that excites me most as we seek to continue to invest and grow our Malta operation as a Centre of Excellence not only within De La Rue but within our entire industry.”

The new facility is a key milestone in De La Rue’s business strategy as the currency and authentication business grows significantly year on year and the identity business shows massive growth.

Our order intake figures for the year are £533 million, a 16% growth in order intake from last year, with accelerated growth in the key areas of security features (up 60%), Polymer (up 23%, Identity (up 36%) and PAT (up 97%). This gives us real confidence in our strategy and provides solid momentum into next year.

De La Rue is committed to its business in Malta and sees it as a central part of its international strategy. Only last month De La Rue signed an agreement with the Malta College of Arts, Science and Technology, to collaborate on new training programmes in printing and secure printing. 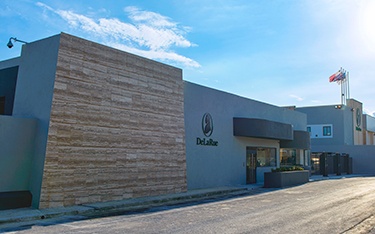