The President was joined at the factory by the British High Commissioner, James Dauris, and the Chief Executive of De La Rue, Martin Sutherland. Together they met key members of staff and toured the facility, which produces 1 billion high quality currency notes a year for the Central Bank of Sri Lanka as well as currencies for a significant number of other countries around the world.

Speaking at the event, the President commented: “The fact that we are today celebrating 30 years of working together is a testament to the skills and capabilities of our Sri Lankan people, and the fact that we can play a significant role in the global economy. I look forward to many years of continued success for this venture.”

The British High Commissioner, James Dauris added: “De La Rue Lanka Pvt Ltd is a prime example of a very successful Public Private Partnership between our two countries. The UK is proud of British businesses like De La Rue that have over 200 years of experience in innovation and offer world class products and solutions.”

Speaking at the event, Martin Sutherland, the Chief Executive commented: “For our business to operate on a truly global scale, we need the very best partners. We are delighted to have been working with the government and people of Sri Lanka for the last 30 years. Earlier this year, we announced that we have also chosen this site to be one of the three key international centres of excellence for global banknote production, together with Gateshead in the UK and Nairobi in Kenya. As a result we will be investing locally to upgrade equipment, technology and skills to further enable De La Rue Lanka to compete effectively on a global scale. We look forward to our partnership going from strength to strength in the future.” 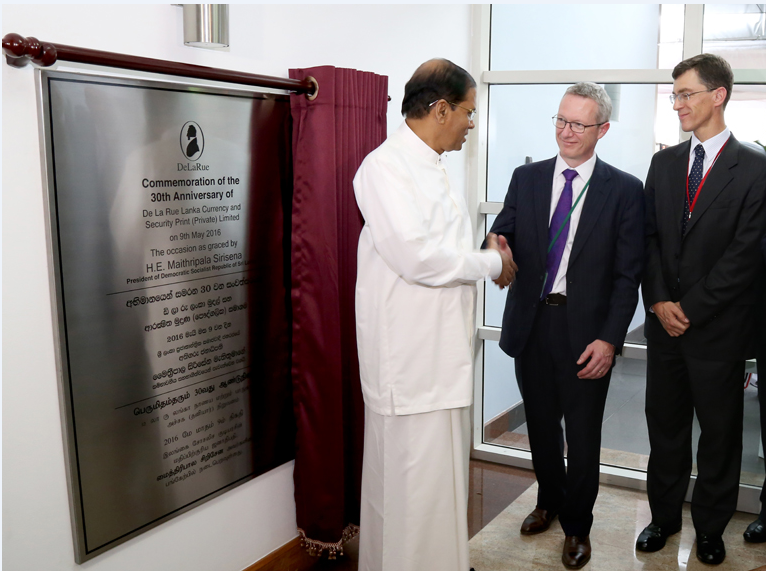 As the world’s largest commercial banknote printer, De La Rue provides customers with a fully integrated range of sophisticated products and services which are available either individually or as a whole. This includes a leading design capability, production of innovative security components, manufacture of security paper and polymer substrates and sophisticated printing of banknotes, all contributing to trust in the integrity of currencies.

De La Rue is the world’s largest commercial passport manufacturer in an environment of increasing global concern over security at national boundaries and border control. De La Rue also produces a wide range of other security products, including tax stamps for governments who are seeking to combat illicit trade and collect excise duties. Other products include authentication labels, assuring purchasers of product validity, and government identity documents. In addition the Group manufactures high speed cash sorting and banknote inspection equipment.