London, 12 February 2015; The Central Bank of Kuwait has been awarded the Regional Banknote of the Year 2014 for its sixth banknote series, issued in June 2014.

The award was announced at the High Security Printing Conference in Manila, Philippines on 19 January 2015 for the Asia, Middle East and Africa regions.

The series, designed and manufactured by De La Rue was recognised for both its security and its elegant design. The vibrant design incorporates the latest security features including Spectrum™ printed feature, StarBright™ colour changing security thread and the optically variable SPARK® Orbital™ ink. 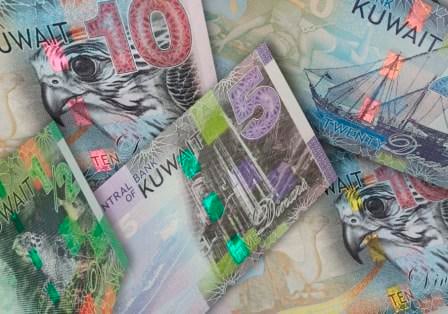 The Regional Banknote of the Year Award recognises outstanding achievement in the design, technical sophistication and security of a banknote or banknote series, the key judging criteria being that successful banknotes should combine visual artistry and high levels of technical and security sophistication, with considerable emphasis placed on reflecting the cultural heritage of the issuing country in the note, and the relevance of the overall design and symbolism to the issuing country.

This award is the 12th for De La Rue in the last seven years. Alan Newman, Director of Design says “We are delighted this series has been awarded Regional Banknote of the Year. The notes have a vibrant design each capturing a different aspect of Kuwait culture. Incorporating the latest security features, this banknote series is a credit to the Central Bank of Kuwait and we are very proud to have worked closely with them on this project.”

Commenting on the award, His Excellency Dr Mohammed Al-Hashel, Governor of the Central Bank of Kuwait said “We are very proud that our new banknote series has won this award. The series has been designed and produced using the most up to date and modern processes and follows our country’s tradition of innovative, well thought-out design.”

De La Rue is a leading commercial banknote printer, security paper maker and provider of security products and software solutions and, as a trusted partner of governments, central banks and commercial organisations around the world, is at the forefront of the battle against the counterfeiter.

De La Rue, as the world’s largest commercial banknote printer, provides customers with a fully integrated range of sophisticated products and services which are available either individually or as a whole. This includes a leading design capability, production of innovative security components, manufacture of security paper and polymer substrates and sophisticated printing of banknotes, all contributing to trust in the integrity of currencies.

De La Rue is the world’s largest commercial passport manufacturer in an environment of increasing global concern over security at national boundaries and border control. De La Rue also produces a wide range of other security products, including tax stamps for governments who are seeking to combat illicit trade and collect excise duties.  Other products include authentication labels, assuring purchasers of product validity, and government identity documents.  In addition the Group manufactures high speed cash sorting and banknote inspection equipment.

About Central Bank of Kuwait:

The Central Bank of Kuwait (CBK) was established by virtue of the Law No. 32 of 1968 concerning Currency, the Central Bank of Kuwait and the Organization of Banking Business. CBK replaced the Kuwaiti Currency Board established by virtue of the Amiri Decree No. 41 of 1960. The role of the Kuwaiti Currency Board was limited to the issuance of banknotes and coins, unlike central banks' broad responsibilities ranging from setting and implementing monetary policies to the regulation and supervision of banking activities. CBK's establishment, hence, was in response of the need to keeping pace with domestic and international developments, particularly in view of the increasingly important role of the monetary and financial policy contributing to the advancement of social and economic development in the country.