London, 2 June 2016: Today the Bank of England has revealed the design of their new polymer £5 banknote that is being printed by De La Rue. Bearing an image of Sir Winston Churchill, the note design was unveiled by Governor Mark Carney at Churchill’s birthplace, Blenheim Palace in Oxfordshire.

The New Fiver retains the portrait of Her Majesty The Queen on the front of the note whilst Churchill appears on the back. A large clear window appears on the polymer note and in the window alongside an image of Her Majesty is a bright holographic image of Elizabeth Tower. This can be seen from both sides of the note and the Tower is gold on the front but silver on the back. The new notes will enter circulation in September.

Commenting at the launch, Chief Cashier of the Bank Victoria Cleland said “The New Fiver brings a step change in counterfeit resilience as well as being cleaner and stronger. We have been working extensively with all our stakeholders to ensure a smooth transition to polymer and I look forward to the public being able to use the fantastic new notes from September. This is an exciting time for Bank of England banknotes and we are grateful to De La Rue for their help in the introduction of these new notes.”

Martin Sutherland, De La Rue CEO commented “Our relationship with the Bank of England dates back to 1724 and we are honoured to have been so closely involved in this latest development in the Bank’s history. The new £5 looks stunning and we look forward to its issue into circulation in the Autumn.”

The paper £5 note will be removed from circulation gradually once the New Fiver is introduced. The polymer £10 note featuring Jane Austen will enter circulation in Summer 2017 and the new polymer £20 portraying J M W Turner will be introduced by 2020. 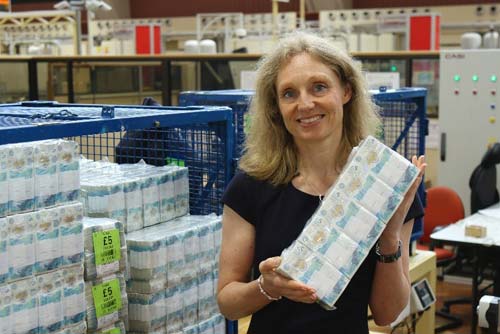 As the world’s largest commercial banknote printer, De La Rue provides customers with a fully integrated range of sophisticated products and services which are available either individually or as a whole. This includes a leading design capability, production of innovative security components, manufacture of security paper and polymer substrates and sophisticated printing of banknotes, all contributing to trust in the integrity of currencies.

De La Rue is the world’s largest commercial passport manufacturer in an environment of increasing global concern over security at national boundaries and border control.

De La Rue also produces a wide range of other security products, including tax stamps for governments who are seeking to combat illicit trade and collect excise duties. Other products include authentication labels, assuring purchasers of product validity, and government identity documents.