The Banco Central de São Tomé e Príncipe has today unveiled a new currency series. The launch is part of the Banco Central’s 25th Anniversary celebrations and consists of six new banknotes and five new coins. The banknotes have been designed and printed by De La Rue, the world’s largest commercial banknote printer, working in close collaboration with the Banco Central.

Mrs. Massari Lima Fernandes, Deputy Governor at the Banco Central stated ‘The notes have been designed to showcase wildlife that typified São Tomé e Príncipe. We have been working in partnership with De La Rue since 1977 and would like to thank them for their continued support through this process’

The new notes celebrate wildlife endemic São Tomé e Príncipe, and include innovative features to make them secure against counterfeiting.

The two lowest note values, 5 and 10 Dobras are on De La Rue’s Safeguard® polymer material, making them very durable whilst ensuring they are highly counterfeit resistant.

De La Rue’s Global Account Management Director Ruth Euling stated “We are very proud to have worked so closely with the Central Bank on their new series as they reveal the beautiful set of banknotes into the country.” 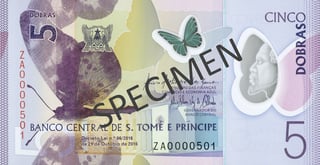