Royal Bank of Scotland has announced its first new £10 in thirty years will go into circulation on October 4 2017.

De La Rue worked closely with the Royal Bank of Scotland and their partners on the design of the new £10 note which will feature the mathematician and astronomer Mary Somerville.

It is the second in a new series of ‘Fabric of Nature’ themed notes made from De La Rue’s Safeguard® polymer material and contains a variety of new security features, making it difficult to counterfeit but easy to authenticate.

It is also the first Royal Bank of Scotland note to feature a specific tactile feature to help the visually impaired.

Mary Somerville was chosen for the new £10 following a public vote across social media. Behind Mary’s portrait sits an illustration of her hometown of Burntisland and a diagram of the moon taken from her book, Mechanism of the Heavens, can be seen when the note is viewed under UV light.

The reverse of the note features a pair of otters, most commonly seen in the UK in the West of Scotland.  The note also features words from acclaimed Scottish poet, Norman MacCaig.

The new £10 note will be 15% smaller than its paper equivalent and the new material will be cleaner, more secure and more durable than traditional cotton notes, on average lasting 2.5 times longer.

Philanthropist and entrepreneur Catherine Cranston will feature on the £20, the final note in the series which is expected to enter circulation in 2020. She is known for establishing a series of tea rooms in Glasgow, including Willow Tearooms which had an interior designed by Charles Rennie Mackintosh.

“We are proud to have partnered with the Royal Bank of Scotland on their first new £10 banknote in thirty years. Our design teams worked closely on the iconic concept and we look forward to our continued partnership.” 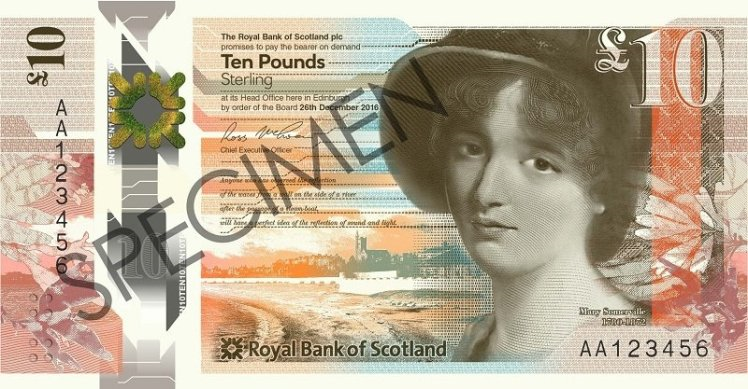