The Central Bank of Uzbekistan to Issue new 50,000 Som on 22nd December

As part of its new “Great Silk Road” series of banknotes, the Central Bank of Uzbekistan will issue its next new denominations from 22nd December 2021. The new notes combine a geometric modern style with antiquity, demonstrating significant landmarks along Uzbekistan’s section of the historical route.

The banknotes were produced by the State Unitary Enterprise “Davlat Belgisi” and feature IGNITE® security thread, with the "Drive" effect in blue to green colourshift. 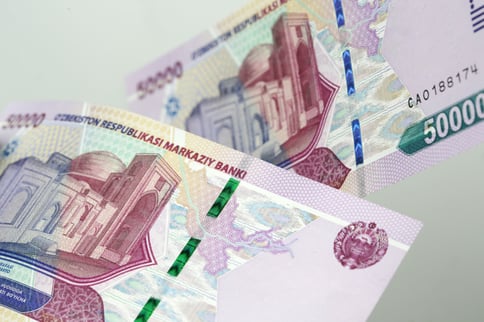 Ruth Euling, Executive Director and Managing Director, Currency: “Congratulations to the Central Bank of Uzbekistan on the launch of this new notes. It is a pleasure seeing the new design enter circulation. We would also like to thank Davlat Belgisi for selecting De La Rue’s security technology”