We operate in three main markets – currency, identity and product authentication – all of which have strong prospects for long term sustainable growth. 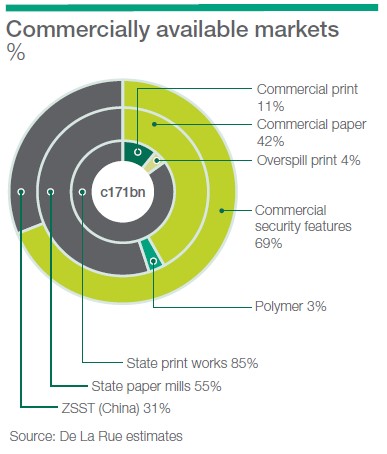 Globally, the total amount of cash in circulation has been growing at 3-4% a year over the past decade and is expected to continue to increase at a similar rate in the future years. Population growth and increasing numbers of ATMs are amongst the main drivers for cash growth.

Most banknotes and the substrates on which they are printed are produced by state owned print works and paper mills of the respective issuing countries. The rest of the demands is met by commercial banknote printers and paper makers.

Around 11% of the c171bn banknotes issued globally in 2017 were printed by a handful of commercial printers. We are the clear market leader here, with 27% market share.

Of the banknotes in circulation, c3% are printed on next generation substrates such as polymer. As central banks seek to reduce the 'cost of cash', polymer is becoming more popular due to its durability, sustainability and greater security. Currently there are only two commercial suppliers of polymer substrate. Although second to the market, De La Rue has been growing fast and has 11% share by volume. 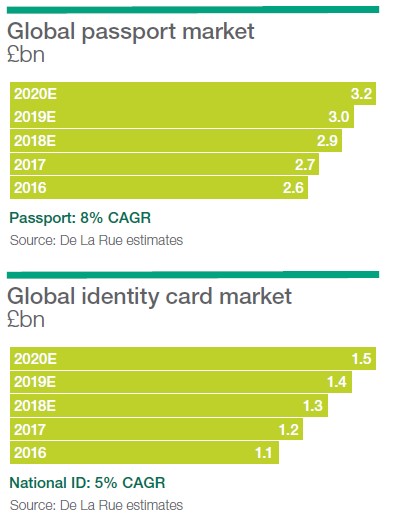 The global identity market, including passports, ID cards, and the associated digital solutions, is valued at around £3.9bn and expected to grow at c6% a year.

With an annual growth of c8%, the passport market remains attractive. Around 165m passports are issued globally each year, 25% of which are avaliable to commercial security printers. Customers increasingly value security features and the systems and services surrounding the physical product. The transitioning from Machine Readable Passports to chip-based ePassports further drives demand for full integration of end-to-end solutions.

The national ID market is expected to grow at c5% a year to £3.2bn in 2020. Technological advances in recent years have enabled new types of ID schemes, combining traditional ID functionality with payment and cross border identification.

Globally the significant increase in counterfeit goods and illicit trade means that governments are losing billions of dollars in tax revenues. At the same time, legitimate businesses and brand owners are being undermined and consumer confidence is being eroded.

Both the tax stamp and brand protection markets are highly fragmented, with most operators offering only partial solutions such as serialised labels and tamper-evident packaging. However, there is a growing trend towards integrated, end-to-end solutions that provide a combination of highly secure labels and unique ID together with systems that can track, trace and authenticate products throughout the supply chain. Online shopping is also driving authentication through a touch point of consumer’s smartphones.