Is it just me, or does there seem to be a new article in the press forecasting the death of cash almost every day?

For example, several articles predicting the “rapid” decline of cash over the next few years have been published in the national press recently. These articles are based on research from UK Finance showing that debit cards are set to overtake cash as the most frequently used payment method in the UK later this year.

I don’t for one minute dispute the fact that UK cash payments have been in gradual decline for several years now, but I would challenge the claim that people are going to start abandoning cash at a rapid rate as a result of this crossover, and would dismiss in particular any claim that the UK is in any danger of going completely cashless. Why? Because at De La Rue we have commissioned annual surveys into payment preferences in the UK for over a decade now which tell a very different story to the one the cashless payment providers would have you believe.

Take, for example, a situation where you had to make a £5 payment in a coffee shop. We are being led to believe that these are the places where cashless payments reign supreme, with some even accepting bitcoin. However, the truth is completely different – in the latest UK survey the most popular payment method for a £5 coffee shop purchase is cash, still preferred by half of the survey population: 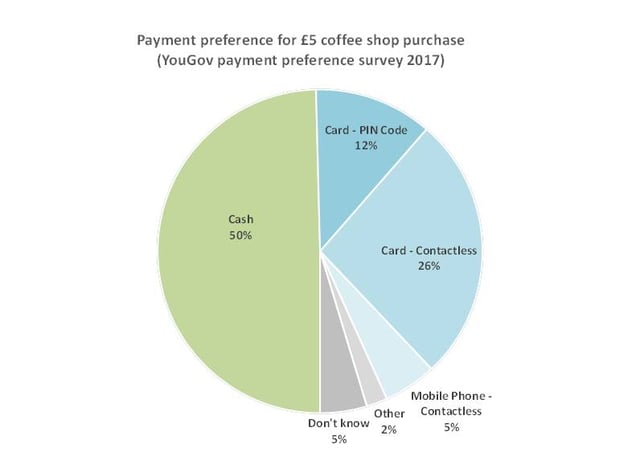 Only around a quarter would choose to make this payment with a contactless card, and only a small minority (5%) would make a contactless payment using their mobile phone.

These payment preference surveys have also proven useful in predicting future cash usage, with a crossover being observed in terms of cards being generally preferred to cash for the first time in 2011 followed five years later by actual card usage overtaking that of cash. If usage is to follow preference patterns we would not expect to see the rapid decline in cash predicted by some articles in the press but more of a plateau, as we have seen in cash preference over the past few years.

One in five people still prefer cash overall (regardless of specific payment bands) and our preference survey shows no indication of that changing. We would predict that this is reflected in payment transaction trends in the coming years. 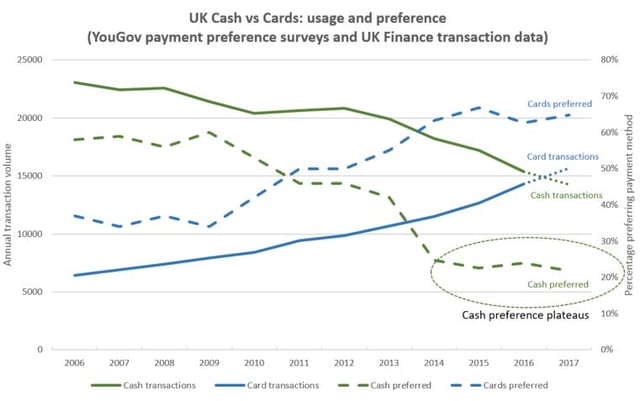 So next time you read an article funded by the cashless payment lobby telling you that cash is about to die out, remember that the British public have been telling us otherwise – we do not see cash use falling off a cliff any time soon.

And we are not the only people who see the importance of cash: according to a survey carried out by Glory, a cash technology solutions firm which polled more than 1,500 shoppers in the UK, US and Australia, 86 per cent of consumers are comfortable using cash and 48 per cent still use cash on a daily basis1.

Four out of five people in the UK say they could not imagine a cashless society2. People like to have the choice to pay however they choose, and for most that choice will include cash for a long time to come.